The Zombie Assassin was an antagonist from the beginning of Getter Robo Go.

The assassin has the appearance of a very tall man with messy and spiked, black hair. He has sharpened teeth and was seen dressed in a large jacket and pants over a large muscular body. With part of his flesh blown off, the assassin reveals his cybernetics including and a demon-like face with legs on his stomach.

The assassin was near-invulnerable able to withstand any amount of damage to his body including a point-blank gunshot to the head. He is armed with powerful guns to take out targets. His stamina is so great, it could keep after its prey no matter what happened to it. 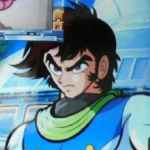