Yasuda was a member of Hayato Jin's old gang and after Jin left. He and the rest of the gang by his next appearance had converted themselves into cyborgs that form the Hyakki Beast Maoki.

Yasuda was a tall boy in his late teens/early twenties with a large chin, sunken eyes and sideburns. Underneath artificial skin, his body was covered with mechanical appliances.

His body modifications made Yasuda far stronger and more agile than he ever was before as a regular human. These would ultimately allow him to be part of the Hyakki Robot Maoki. 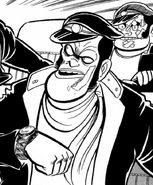 Yasuda is revealed as an oni