Lieutenant Yamaguchi was the original pilot of Hayato Jin's Getter Robo 3. He was later replaced with Gai Daido after proving to be mentally unstable.

Yamaguchi was boastful about his place in JSDF, but was terrified at the thought of crashing while forming the Getter, his fears only furthered by the deaths of two of his long time friends who were also pilots.

Yamaguchi spent years in the air force giving him first hand experience in piloting jets. However, when it comes to the more intense pressured and manoeuvrability of a Getter unit, Yamaguchi is unable to pilot the machine correctly. 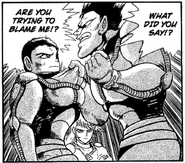 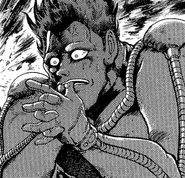 Yamaguchi begins to loose it
Community content is available under CC-BY-SA unless otherwise noted.
Advertisement