Volga 80000 was an enormous humanoid mobile fortress built by the Russian military. It was seen in Getter Robo Go.

Volga resembles a massive semi-humanoid torso mounted atop two stubby legs. It has large plated arms and small claws for hands. It's head is covered in armor and resembles that of a knight.

Aside from it's gargantuan size and claws, Volga also has the ability to transform into a massive cannon. If Volga's cannon is disabled when in cannon form, the barrel possesses several handles for a similarly large robot to manually aim it.

Volga 80000 was among the many allied robots that assaulted the Dinosaur Empire's forces in the final battle of Getter Robo Go. Assaulting the Empire's superweapon Myu, Volga and the Stealth Bomber were the last robots left unscathed in its rampage, and were barely able to destroy it before it could retaliate. 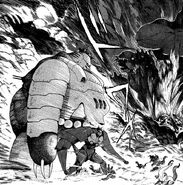 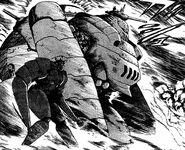 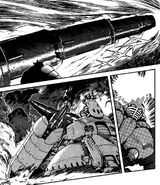