Uzahra (ウザーラ Uzāra) is the last and ultimate creation of The Hyakki Empire, it's also the personal mech of Emperor Burai.

The humanoid body extending from the back features a head which features spikes, dark lenses, and a mouth piece. The body features chest armor with sharp looking shoulder areas and a serpent-like emblem on the chest. Its arms feature padding as well as sharp fingers. Beneath the humanoid body is a gigantic serpentine dragon that is covered in pale green armor and gray rings. It features a toothed head crest, sharp teeth in its jaws, and yellow eyes with a red cross-like iris.

The armor and power of Uzahra's full dragon-like body is beyond anything most civilizations are capable of, surviving time and boasts amazing firepower that can take apart an army including a beam attack from the main body's mouth and an antigravity device that can hurl objects as large as the Hyakki Empire's Fortress Island into space. Uzahra also possesses an artificial intelligence allowing it to operate without a pilot, sense danger, and follow commands of its designated controller. 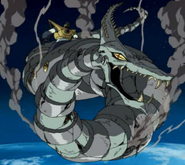