Triple Drill Mechasaurus was a Mechasaur that attacked Y City while Ryoma was still suffering from amnesia.

It was a large Mechasaurs, it walked on two legs and in place of arms were a massive pair of Drills with another drill located behind his head. He had body armor covering his upper body and groin as well as his lower legs.

The Mechasaur could attack with its drills and was capable of burrowing underground.

The Triple Drill Mechasaur attacked Y City with news of the Getter Team being at the city. However when seen by the patients in a hospital, they revealed themselves to be Oni and attacked the Mechasaurus. While many Oni ended up dead by the Mechasaurus was destroyed by its attackers. 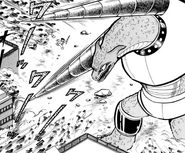