Stilva α04 was an American produced mecha that first appeared in the Getter Robo Go manga, and later went on to make an appearance in Getter Robo Armageddon. It was a limited production, variable-type mecha that possessed both land and air capabilities, and was co-piloted by the American Army members Schwartz Koff and John Lambert.

Stilva is a humanoid super robot that is designed for land and aerial combat. The body can transform itself into a stealth jet-like mode that is capable of flight. The "face" is able mimic the expressions of the pilot in Armageddon.

The Stilva has two variable forms, flight mode and battle mode. The manga version requires two pilots one for the controls, and another for the weapons. The Armageddon version only requires one pilot and uses a firearm, a combat knife, and missiles.

In the Getter Robo Go manga and Getter Robo Daikessen, the humanoid form's side guards are able to disconnect and attack distant enemies in a manner similar to boomerangs, and its extremely sharp hands are used to slice through enemies. The fighter mode can shoot numerous lasers at enemies, and charge a load of power before ramming into enemies.

The Stilva was seen patrolling the Alaska lands when it came across the Getter Robo Go giving out a distress signal as it was being attacked by Metal Beasts. While was one of the pilots Schwartz refused to aid his superior allowed it, showing the Stilva's capabilities. Docked into the base, the other pilot John Lambert was injured during the Metal Beast attack on the base. With Lambert injured, Schwartz allowed Sho Tachibana to join him on the mission in a counterattack. The battle was difficult due to the amount of Metal Beasts it fought against but it received help from the Beetle T23 piloted by Go Ichimonji. Lambert later recovered to join Schwartz in the battle against the Turtle Dragon where they performed a kamikaze on the interior which destroyed the Stilva and took Lambert's life, but Schwartz survived.

The Stilva now exists as two separate robots piloted by both Major Schwartz and his right hand Lambert. Lambert and his Stilva however did not survive the battle with the Invaders. 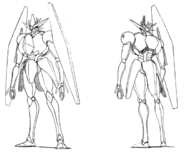 Stilva in its flight mode

Stilva in its stealth mode