Sho Tachibana is one of the pilots of the Getter Robo Go in the eponymous manga. She is the daughter of Dr. Tachibana as well as the younger sister of Shinichi Tachibana with whom she shared a close bond with. By the later half of the series she becomes a co-pilot of a bomber jet with the American pilot Schwartz Koff after the Getter is broken beyond repair.

Sho is a young woman with an athletic build and long red hair. She is a serious minded individual ready to take down the Metal Beasts and Dr. Lando for what Lando did to her brother and all of the other scientists in the original Vega Zone project. Sho was close to her brother Shinichi, to the point of being able to sense his presence from afar in a psychic-like state.

She later formed a close bond with her co-workers in the Getter ready to work with them and acknowledge their abilities. Her bravery and diligence earned her the respect and affection of Schwartz Koff who previously had a strong animosity towards the Japanese and did not have a good impression on women. Sho in turn became close with Schwartz, risking her life to save him and even became his partner in the US Air Force.

Sho is highly skilled in Iaido, the drawing sword martial art, able to move her sword at great speeds. The sword itself is able to cut through steel beams and Lando's cyborgs with ease. She is an accomplished pilot, one of the few able to effectively pilot a Getter Machine and is even able to pilot other machines including a bomber jet.

Sho was first seen with Hayato Jin when scouting Go Ichimonji and later helping him fight off a couple Metal Beasts before drafting him into their service. Sho has a hard time with Go's attitude and how he handled a situation with a Metal Beast but she accepted him as a teammate and later showed some interest in the mechanic Gai Daido along with him. They convince Hayato that Gai was the better candidate after putting him action. With the Getter Team assembled, they fought against the Metal Beasts until Prof. Lando threatened Japan to turn over the Getter.

Escaping, the Getter Team fled to Alaska where after being attacked by Metal Beasts they are rescued by the Stilva α04. One of the pilots, Schwartz Kopf had a high dislike of the Japanese population and did not think highly of women until Sho saved him from when the base was being attacked. After this, he allows Sho to pilot the Stilva with him as his usual partner John Lambert was injured.

Sho would later sense her brother from within the army after the attack was repelled, steeling herself for the battle with the Dragon Turtle. Within the giant fortress after the Stilva did a kamikaze run, Sho and the rest battle Shinichi and his Metal Beast Garon Z-54 with Sho using her psychic-like bond with him to track his movements for a final blow. When Schwartz was revealed to be still alive, Sho got to him in time before the Turtle Dragon exploded as well as hearing her brother's last words as he was freed from his brainwashing. With the Getter badly damaged and Schwartz needing a partner, Sho stayed behind with the US Army while her teammates went back to Japan.

Seen in a bomber with Schwartz in the final battle against the Dinosaur Empire, Sho watches the light from the Shin Getter Robo as if finishes off the main army and proceeds to enter space. 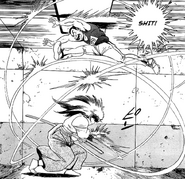 Sho in her pilot suit 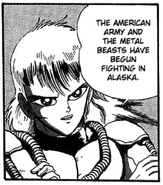 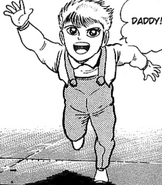 Sho as a young child 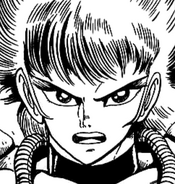 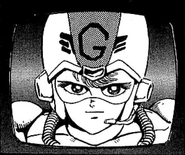 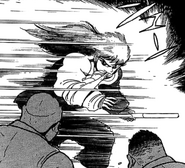