Sho was one of a group of boys who were survivors of an attack against Y City by the Dinosaur Empire.

Sho was a short boy in his very early teens. He was slightly fat and well muscled for his age, he had short black hair and always wore a school uniform. Sho is shown to be hot-blooded and vengeful willing to give his life to taking revenge on the Dinosaur Empire yet is unable to view the scope of events, rushing in blindly in a suicide run. Despite this, he still hesitates at some intervals.

Sho found Ryoma Nagare after he crashed onto the ruins of his towns. When Ryoma found out about what happened and that Sho and the other kids were prepared for a suicide run on a mobile base of the Dinosaur Empire, Ryoma tried to talk them out of it to no success. After some of his friends went down with no success and the Getter Robo was being attacked, Sho threw dynamite at the Mechasaurus before throwing the rest at the base which severely damaged the base. Before he was caught in the explosion, Ryoma managed to get Sho in the hand of the Getter Robo as he lost consciousness. After the battle, Sho was recovered finding himself stranded in the wreakage of the city. 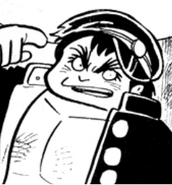 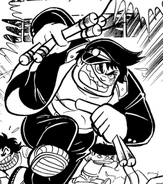