Shinichi Tachibana is the older brother of Sho Tachibana and the son of Dr. Tachibana. Unlike his anime counterpart who was simply killed by the forces of Prof. Lando, this iteration was brainwashed by Lando's forces into one of Lando's soldiers and pilots.

Compared to his anime counterpart, Shinichi is younger and has a starkly different appearance with a bald head that shows a visible scar from where he gained the cyborg surgery. Before Shinichi was brainwashed, he was a young man with an average height and weight with an athletic build and short black hair.

Shinichi was originally a supportive young man who was very close with his family so much that he and Sho shared a connection where they could sense the other's presence. After his conversion into a cyborg he was left emotionless and became a willing mind slave to the army of Prof. Lando. By his near death in battle against the Getter Robo Go, he reverted to his original personality happily seeing his sister and her friends off.

Shinichi was stated to be a developing scientist going along with his family in the Vega Zone project. He and Sho possessed a closeness that allowed them to sense each other but Shinichi seems to have lost this after his conversion. After becoming a cyborg, he pilots the Metal Beast Garon Z-54, which he pilots to a deadly degree allowing him to pilot the robot in a no-holds bar against the Getter Go.

Shinichi was with his family in the Vega Zone project. When Prof. Lando took over the base and attacked the other scientists, Shinichi ran with Hayato Jin and his family to escape. During the attempted escape Shinichi stayed behind to hold off pursuers. He was thought to be dead, but was later revealed to have been converted into a cyborg by Prof. Lando to join his army.

For most of the series Shinichi was in the Vega Zone army but was not given a large role until the battle in Alaska where Sho managed to sense his presence. When the United Super Robot Army stormed inside the Turtle Dragon, Shinichi piloted Garon Z-54 against the Getter Robo. Its immense speed and raw power overpowered the Getter until Sho sensed his presence and the Getter Team struck him destroying the Garon Z54. Barely alive afterwards, he sees Sho telling her to escape and leave him behind so that she and her teammates will live. Shinichi dies with a smile on his face as the Turtle Dragon explodes. 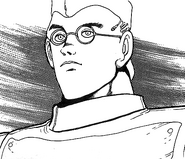