Schwartz Koff is an American soldier of German descent and a major character in the second major arc in the Getter Robo Go manga. He is the co-pilot of the Stilva α04 partnered with John Lambert. Unlike Lambert he is openly hostile towards the Getter Team due to his strong distaste for the Japanese population. Over time however, he grew close with Sho Tachibana and even fell in love with her.

Schwartz is a young man with an athletic build and short blonde hair. He has always been seen in his military pilot suit commonly seen in American Air Force pilots.

Schwartz is a white supremacist believing Caucasian people are always better than other races and looking at those races with scorn. Out of other races and national biases, Schwartz puts most of his hatred on the Japanese. This is because his grandfather died in Pearl Harbor and his father's automobile company got outsold by Japanese cars. He does not have a high opinion of women either. After being helped by Sho a couple of times, his image of both the Japanese and women start to change but he still acts cocky around people like Go Ichimonji.

Schwartz is a competent fighter pilot able to control the Stilva and a bomber, although both times required a co-pilot.

Schwartz appeared with Lambert piloting the Stilva in Alaska. When an SOS message came from the Getter Robo Go, Schwartz was against the idea of helping due to their heritage. However Lambert went ahead using the Stilva to fight off the Metal Beasts. Schwartz was not pleased about this excusing that Stilva fighter mode was exposed to the enemy.

At the base, Schwartz did just about everything to humiliate and abuse the Getter Team and their allies which got him into a few quarrels with Go. When the base was attacked, Schwartz was about to crushed under rubble until he was saved by Sho. After evacuating he goes to thank Sho while learning about her brother in the enemy ranks. Schwartz allows Sho to co-pilot the Stilva with him as Lambert was injured.

Against the wall in battle with the Metal Beasts, Schwartz and Sho are helped by Go in the Beetle T23. With the enemy regrouping on the Turtle Dragon, Schwartz pilots the Stilva with Lambert going in for a kamikaze to make room for the Texas Battleship. He managed to survive but lost consciousness. When the Getter defeated the Metal Beast piloted by Shinichi Tachibana, Sho goes to help him and manages to get him out in time before the Turtle Dragon's destruction. Schwartz then pilots a bomber jet to deal with the remaining forces of Vega Zone while noticing the activities of the Dinosaur Empire with Sho as his new co-pilot. 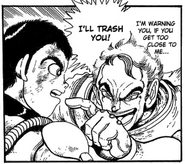 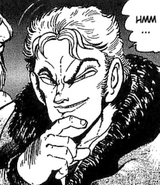