The Scarred Minobi Pilot was a minor antagonist in Getter Robo G.

He had a tall figure with long fair hair, bull-like horns and a large scar across his face, he wore a black jumpsuit just in the style of a feudal era shizoku like his co-pilots.

He was sufficiently sadistic and served under the Hyakki Empire without question, working well with his co-pilots.

The pilot along with the others were sent out to find the Getter Robo G as well as any sign of resistance against the Hyakki Empire including Uzahra. Upon finding the robotic dragon, the pilots proceeded to slaughter the Atlanteans in stasis. The survivors were stunned by this and the Getter Team escape their confines to fight in spite of being weakened. The scarred pilot proceeds to attack Hayato Jin only to be impaled by a rod. 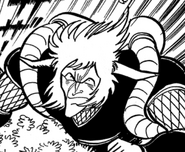 Rushing through the forest 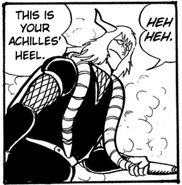 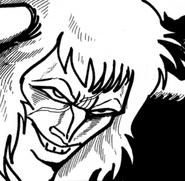 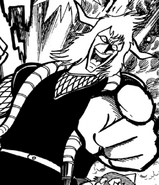