Ryuji was the cousin of the Getter-2 pilot Hayato Jin, after Hayato left his old gang Ryuji took charge and made an alliance with the Getter Team's most deadly of foes.

Similar to his cousin, Ryuji was a tall good looking man in his late teens, he had chiseled and defined looks with short scruffy hair.

Ryuji's enhanced body allowed him to have much more strength and agility than any normal human. He also acted as the head of the Devil King after combining with the rest of his gang.

Whilst he did care for his cousin, he lusted for power to take control of Japan. However even he knew his own faults and that he needed Hayato on his side to get every like minded person on his side.

Ryuji at some point after taking control of the gang made a deal with the Hyakki Empire in order for him and the gang to become cyborgs that could become Devil King. Realizing his limits his leader, Ryuji strove to get Hayato back into the gang even having his gang members kidnap and restrain him to a machine. When Hayato refused disgusted by what Ryuji did to the gang, Ryuji and the gang decided to fight the Getter Robo G to prove they're stronger as Devil King. While Devil King had the upper hand, Hayato challenged Ryuji to fight the Getter at full strength with him inside the Getter. Feeling insulted, Ryuji was about to oblige but he and the rest of Devil King were forcibly controlled by Dr. Gura to finish off the Getter. Hayato manages to make it back inside the Getter in time to fight back, taking out the command piece that was Ryuji as Getter Liger before Getter Dragon finished off Devil King ending Ryuji and his gang.

Ryuji in a mech suit 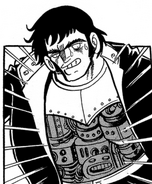 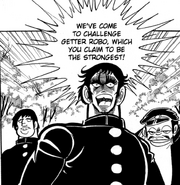