This page describes the Ryoma Nagare seen in New Getter Robo. For other versions of the character, see: Ryoma Nagare (Disambiguation).

Ryoma Nagare (流竜馬 Nagare Ryōma) is the main protagonist of the New Getter Robo OVA series. Originally the owner of a dojo deep in debt from mob enforcers, he is pulled into the Getter program after being tracked by Dr. Saotome. Instead of fighting the cunning Dinosaur Empire along with Hayato and Musashi, this version of Ryoma fights against the savage Oni with Hayato Jin and Benkei Musashibō.

Ryoma is a young man of average height with an athletic build, messy black hair slightly combed forward, and piercing dark eyes. His pilot suit consists of a blue outfit with light blue sleeves and leggings, a green scarf, as well as a white helmet with a red outline and clear visor.

Ryoma is a hot headed and brash fighter who always prefers to settle things in a fight rather than negotiate. This is much more obvious than other incarnations who occasionally appear to be somewhat more level headed. He dislikes being wronged in any sort of way whether it is the yakuza who try to pilfer his dojo or the immense power of the Getter. At first he was a bit more unmotivated to pilot the Getter with Hayato and Benkei, thinking more about fighting the Oni but learns to respect their company, yet still acts cocky and upfront.

Ryoma possesses a powerful body and fighting style that borders on being superhuman, able to effortlessly fight off members of the yakuza, assassins, and even the Oni. This build is what allows him to pilot the Getter Robo without much trouble and along with his strong will, helped by his teammates, never falls victim of being completely consumed by the Getter Rays.

Prior to the start of the series, Ryoma was trained in his father's style of karate. However in spite of his mastery of the style, his skills nearly killed an opponent during a Dan test leaving Ryoma expelled from the world of karate. After his father died, Ryoma was left in the care of his dojo in Shinjuku. However, it is left in debt by several members of the local yakuza; leaving Ryoma to fight them off regularly.

New Getter Robo begins with Ryoma being beaten up by debt collectors in an alley, where he beats up his tormentors after toying with them. After spending some time in a local ramen bar, Ryoma returns home after harassing a local Mexican immigrant. There, he is assaulted by Dr. Saotome's assassins. After defeating them and being shot with an animal tranquilizer, Ryoma leaves himself and Saotome as the only ones left standing before passing out.

After awakening in Saotome Labs, he proceeds to bust himself out and discovers the existence of the Oni when they invade the facility. Ryoma, Dr. Saotome, and his son, Tatsuhito, proceed to fight against the Oni despite Getter-1 being only partly finished and Tatsuhito, the prototype's pilot, being infected. While Tatsuhito partly succumbs, Ryoma boards the incomplete Getter and destroys both a large Oni and the Proto-Getter. After Ryoma receives a decent round of training and the rest of the remaining staff relocate to a new base, Dr. Saotome locates the Getter's next pilot: Hayato Jin.

Hayato attempts to attack the lab's new location, and Ryoma is sent to test the power-crazed terrorist. After Oni interrupt their brawl, Ryoma and Dr. Saotome board the completed Getter Robo while Hayato is forced into the cockpit by a crowd of staff. After defeating the one Oni that remained, Hayato gets a hang on the controls of Getter-2 and decides to attack Saotome Labs again, much to Ryoma's dismay. After knocking Hayato out, Ryoma swiftly ceases the Getter's movements. While investigating Oni sightings, Ryoma discovers Benkei Musashibō. After Dr. Saotome forces the former monk into piloting Getter-3, the trio defeat the Oni responsible for the sightings.

After defeating various other Oni, the Saotome Institute discovers a swirling vortex in a lake where the Oni are believed to be coming from. The Getter Team enters it after Ryoma makes an infamous remark seen above, and are transported to Heian era Japan. There, Ryoma is captured after assisting in an Oni-infected samurai (Sawada Tsunayoshi) Hara-Kiri due to a misunderstanding. After breaking out and winning the trust of the locals as well as their general, Minamoto no Raiko, Ryoma learns the identity of the potential master of the Oni: Abe no Seimei. Ryoma then proceeds to attempt to storm Seimei's stronghold on foot.

After reuniting with his teammates and observing Raiko's sacrifice, Ryoma proceeds to defeat Seimei before being pulled into another vortex which forces the Getter Team back to their proper time period. After returning from the past and avoiding being accidentally shot down by Saotome Labs, their mech is upgraded by a Getter Ray-obsessed Dr. Saotome. When Ryoma pilots Getter-1 in a training exercise, he is transported to a Getter-ruled future where his colleagues and the rest of humanity have become biomechanical slaves to their Getters. After attempting to challenge the beast that rules this Earth, Ryoma is snapped back to his own time, where the rest of Saotome Labs are convinced that he simply passed out during his flight to the upper atmosphere. Ryoma decides to abandon the institute after this revelation. When faced with Seimei, who has returned seeking revenge, Ryoma decides to fight back in the Getter, despite his feelings on the matter, and destroys Seimei once and for all.

After confronting Dr. Saotome, who hears Tatsuhito in the Getter Rays, Ryoma and the rest of the Getter Team is forced into combat when four entities claiming to be gods appear. After Dr. Saotome sacrifices himself to power up Getter Robo, the Getter and the four beings fight against each other before being transported to a world filled with abandoned Getter Robos. Ryoma, after being dominated by these vengeful beings, stabs himself with a knife and suddenly starts to go berserk due to overexposure to Getter Rays absorbed from the uncountable amount of wrecked Getters.

While the leader of these four, Tamonten, claims that "the fusion has started...", Ryoma pummels the other three with his copilots suffering all throughout. After regaining his senses due to Hayato and Benkei's intervention, Ryoma finally defeats the three 'gods' before going after their leader. After a long struggle, the three Getter pilots defeat their last foe with a powered-up Getter Beam. After witnessing a giant hodgepodge Getter Robo crush the broken being, Ryoma decides to separate and go after the behemoth. While Hayato and Benkei somehow return to Earth and ponder Ryoma's fate, the man himself is finally seen in Getter Valhalla facing numerous foes in a Getter Robo closer to the original. The OVA ends with Ryoma brandishing two tomahawks from his Getter and rushing towards his foes.

"If there's a hole, a guy's gonna be ready to thrust into it." 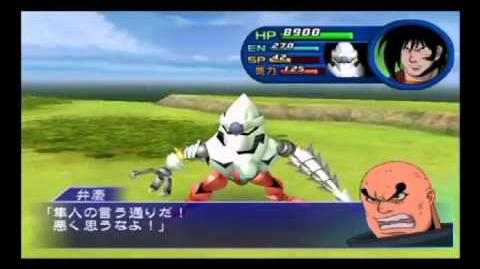