Ryoma Nagare is one of the main characters of the Getter Robo Daikessen ! video game, as the pilot of the flight mode of the Getter robots. He is the inheritor of a pragmatic style of karate used by his late father and has been one of the few people that became closely tied with the Getter Rays.

Ryoma is a lean and athletic teenager with messy black hair that went down his neck and extended at the front. His pilot suit featured a white helmet with red outlines and a clear visor, the suit was colored a light blue with dark blue outlines and featured a green scarf.

Ryoma is a hot blooded young man eager for a good fight even in the face of a powerful adversary. He possesses a compassionate but vengeful attitude to take on people who wronged someone.

Ryoma was trained in his father's pragmatic style of karate from an early age and is quite powerful in combat, able to wound and injure enemies that have a more powerful constitution than a regular human with his fists alone. This combined with his strong fighting spirit impressed many including Dr. Saotome. As a pilot, Ryoma's skills are only matched by his teammates piloting any of the Getter robots to their fullest potential after only a few times piloting the controls. 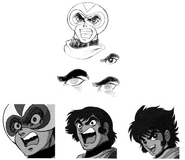