Reptiloids are the main foot soldiers of the Dinosaur Empire in the Getter Robo manga from the more generic tribes of the Empire, yet compared to most other soldiers they are more feral. Strangely after their appearance in the original manga, they are never seen again. Their equivalent in the anime are the Dinosaur Soldiers.

Reptiloids are generally humanoid dinosaurs with bird-like feet, visible pectoral muscles, an extended face with a powerful jaw, sharp claws, and wings with small digits on the back for flight. Another type resemble chameleons including the scaly eyes, a pair of horns above the eyes, and have wings under their arms.

While Reptiloids usually act feral towards humans including performing suicide missions and viciously tearing targets apart, they are also intelligent enough to use advanced technology like a Mechasaurus or use the high tech weapons of the empire. Their leg muscles allow them to move in short bursts of speed and their wings allow them to fly. They are also apparently durable to the point where only eliminating the head will kill them, even after being pierced by sharp objects. 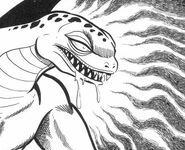 The Reptiloids close in on Hayato Jin 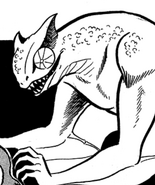 Ryoma Nagare shoots down a Reptiloid
Community content is available under CC-BY-SA unless otherwise noted.
Advertisement