Hyakki Beast Raoki was a Hyakki Beast intended for use only when the Hyakki Empire was on its last legs. It was the final opponent confronted in Getter Robo G, as part of a later addition released several years after initial publication.

Raoki was a huge titan of a Hyakki Beast, he had a massive cluster of horns atop his head with a crab like mouth, below on its chest was a large gleaming face with large horns. He had thick and chunky arms with legs and tentacles going down his back.

Raoki was essentially a walking bomb, capable of radiating heat and energy from just charging up. Anything touching Raoki would either melt or burnt off. At full charge, Raoki could create a massive explosion that could take out the entire empire's fortress. He was near impenetrable to damage and was able to fly. He could also extend his tentacles from his legs and grapple foes in them.

In the final battle against the Hyakki Empire in space, Dr. Gura activated Raoki as the final straw against the Getter Robo G even though it would likely mean certain death for the empire. Fighting against the Getter, Gura eventually activates Raoki's self destruct. Getter Dragon manages to get Raoki out in time before it exploded before going at the Empire's fortress. 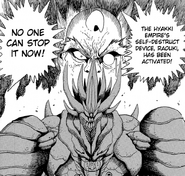