The Hyakki Beast had a humanoid appearance with a sleek body, it had a massive spike crested padding hanging over the top of its body with its face located in the center and a large horn protruding from the top of its head.

The Hyakki Beast's main ability is using radio waves that allow it to disorient machines while also controlling the functions of some machines. The radio waves can also be used offensively as a wave of energy. 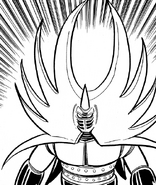