Rad was a Mechasaurus seen in the origonal Getter Robo. It was piloted by the leader of the Chiryu Clan, Neon. It is unique in the fact that it can split up into three bodies.

When fully formed, Rad resembled a dragon-like biped with large metal wings, a pterodactyl-like helmet covering his reptilian face and a chunky tail. When split apart his wings and helmet separate to make one pteranodon body and the tail another with a face that has a pair of blank eyes, a mouth, a horn, and insect legs.

Rad was capable of flight and had a great amount of strength. It could fire missiles from its wings and could detach its tail to use it like a flail. The wings were piloted by Neon once separated.

With the infiltration strategies ending in failure, Neon launches Rad to attack the Saotome Institute. After a shaky launch and failure to assume the Getter 3 formation, the Getter Robo fought against Rad. While the Getter 1 formation was beginning to get the upperhand, Rad detached its parts and began to fight the Getter as three separate parts that put the Getter in a bind. Fortunately, the Getter managed to free itself from the flight unit destroy it, take out the tail flail and destroy the main body with a Getter Beam. 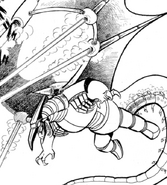 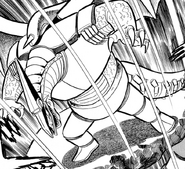 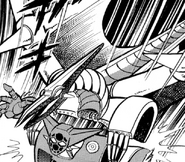