The Prototype Getter Robo is an early Getter robot developed for testing the Getter Energy core. It was through the test that Dr. Saotome started to obsess with the Getter Rays and set in motion the events of the OVA. A few other prototypes also exist that are either mass-produced or unmanned.

The prototype has similar features to the Getter Robo from the original series including the face structure and body frame.

The mass-produced model is colored monotone white and gray and resembles the prototype from the original anime. The unnamed models are the same color but have different appearances including an appearance similar to the Getter Go and other series models.

As it was only a prototype, this Getter Robo lacks much of the more offensive qualities of the completed Getter Robo. As such it lacks weapons like the Getter Beam and Getter Tomahawk. However it is capable of launching at high speeds enough to break through the sound barrier in seconds with the exhaust enough to burn smaller enemies. As shown in a flashback, it seemed vulnerable to control from the Getter Ray source. The other models are built only for training for the combat and defense force to find pilots, as such they lack weaponry.

The prototype was originally developed for research on Getter Energy while being piloted by Dr. Saotome's son Tatsuhito Saotome. However, during a test, Tatsuhito lost control of the machine and would have been consumed by the Getter Rays if the test wasn't halted.

Years later, the training prototypes were being used to find suitable pilots but none were able to handle the pressure exerted by the jets. The original prototype was used by Dr. Saotome, Michiru, and the newly recruited Ryoma Nagare to escape from the Oni infected facility, giving Ryoma his first experience with the Getter Robo.

The other prototypes were often seen below the facility as if communicating with Dr. Saotome through the Getter Rays, often shown by Getter Ray particles flickering. 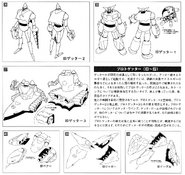 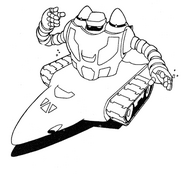