A modified prototype Getter Robo serves as the primary machine of the Getter Team in Getter Robo Hien ~The Earth Suicide~.

The Getter 1 formation primarily piloted by Tsurugi Ryuki resembles a smaller Shin Getter Robo flight formation, possessing a similar body frame, eyes with pupils, and even wings. On the left shoulder pad is a kanji. This forms is the most used given its flight capabilities and having more access to weapons.

The speedy ground based Getter 2 formation primarily piloted by Dan Amakusa which is capable of moving at high speeds and low altitude flight. Like many similar forms it is armed with a drill on the right arm.

The heavy duty Getter 3 formation piloted by Goki Hagane is built like a tank and armed with a series of missiles, typically used in artillery fights. 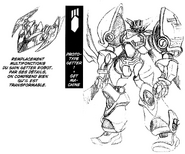