Neon is the leader of the Chiryu Clan group sent to attack the Saotome Institute.

Neon has a rather humanoid appearance possessing a human-esque face, shoulder length hair, as well as human-like limbs. Some unusual feature include a monobrow, a pair of antenna coming out of the top of his head, and reptilian eyes.

Neon shows loyalty to the Chiryu Clan and will do any job that has even a remote chance of giving them equal rights in the Empire.

Neon possesses a form of foresight that allows him to gaze into the future. This allows him to formulate plans for his group to use, whether to avoid a future or use it to their advantage. He is also able to control a Mechasaurus that gave the Getter some trouble. 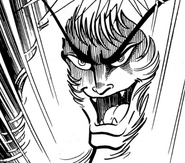