Nagare is the main protagonist of Dino Getter and the first of the three pilots of the Dino Getter Robo. Beginning his journey as a frightened young boy, he grew into a fearless fighter ready to face the Dinosaur Empire.

Nagare as a child had messy black hair with a dirty face, had the average build of a child his age, and always wore rags. After getting a serious injury, he was outfitted with special bionics that appear and disappear on his chest. As a young man, Nagare's hair grew out while becoming taller and more well built. He was usually seen in pants, shoes, and an occasional jacket.

Living his early childhood in fear, Nagare was dependent on his parents until they were killed. Meeting Goki however, Nagare began to look up to him as someone strong enough to survive in spite of losing his own family. Even after losing Goki, Nagare decided to remain strong even when things looked hopeless. This allowed him to be selected by the Dino Getter, saving his life and dedicating the rest of his time to overthrow the empire.

As a young man, Nagare became much more headstrong and violent with a belief in the law of the jungle where the strong should be the ones making decisions. This put him at odds with other humans like Tomoe but they and Jin eventually manage to work out a team. Even after learning about Saotome's betrayal of humanity, Nagare continued feeling that he owed the old man for saving his life.

Nagare spent his early life running and evading from the empire giving him high amounts of endurance. His vitality was enhanced upon being inspired by the late Goki, able to instinctively get a spear to miss his vitals when struck. This strong will was what allowed Nagare to communicate with the Dino Getter and synchronize with it without any training. The bionic implants placed into his body allow Nagare to control the Getter through both movement and telepathically. After much training, Ryoma's physical body could grapple with a Dinosaur Empire solider and easily overpower them.

Nagare from his early childhood lived with his parents until they were hunted down by the Dinosaur Empire soldiers for sport. Devastated, Nagare found solace in the boy Goki. Goki took Nagare in as an underling, sharing with Nagare his wish to avenge his loved ones against the empire. Nagare could not understand why Goki was like this but after being ambushed by hunters with Goki dying without fear or sadness inspired Nagare to keep living. As such he took a stand against the hunters including Komodo holding Goki's severed head. Nagare's body was pierced by a spear and he plummets into a ravine where he is caught by the Dino Getter. Found by Saotome, he is outfitted with special bionics. Waking up, Saotome explains to Nagare about the Dino Getter and how it can fight back against the empire but even after Nagare showed the ability to move the Getter with little effort, Nagare will have to get stronger if they are to have a chance. Nagare takes the risks and spends the next few years under Saotome's wing.

Emerging after several years as a young man, Nagare takes the fight to some Dinosaur Empire soldiers and used the Getter in battle, wiping out the Mechasaurs in his path. He and the Getter fight against Komodo and his own personal Mechasaurus and despite some minor hindrances, destroyed the Mechasaurus and Komodo with the Getter's Shine Spark. He and Saotome eventually encounter human guerrillas lead by the large man Tomoe. While getting into a scuffle with Tomoe, Saotome calms them both down reminding them of their real enemy. Tomoe agrees to work with Nagare and Saotome if they rescue his friend Jin. Nagare finds Jin as he is about to be executed by the Dinosaur Empire prince, Drago. With Jin badly wounded, Nagare gives him the option to fight back which Jin accepts piloting the Getter 2 formation.

With Tomoe joining in during the fight with Drago and his Pikanodon, Nagare and the rest of the Getter Team take the fight to Drago's father Ghoul. During the fight, Nagare learns that Saotome's research on the Getter Rays is what caused the rise of the Dinosaur Empire. Saotome's remaining consciousness confirms this but even still, Nagare and the others destroy Ghoul ending his reign. 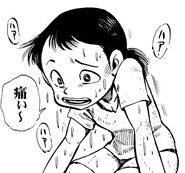 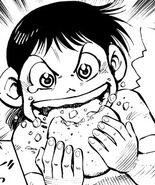 A young, and also hungry Nagare 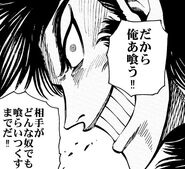 Nagare and Tomoe
Community content is available under CC-BY-SA unless otherwise noted.
Advertisement