Musashi has an overweight figure but has noticeable pectoral muscles. When not piloting the Getter he wears his school uniform which always has the jacket open. He originally wore Dr. Saotome's old pilot suit which was a yellow jump suit with a white helmet and clear visor that covers his face, after it was confiscated he wore samurai-esque armor to pilot the Getter along with an orange cape, helmet, and a pair of goggles. His dark colored hair style has changed throughout the series, at the start of his debut it was messy but later became a combed pompadour.

Compared to his teammates, Musashi is quite lively and happy go lucky. However, he can be tough when he needs to be, especially when the Getter or his friends are involved. He is also rather stubborn, insistent to pilot the Getter Robo despite not having some requirements and has enough bravado to get through even the toughest situations. When it all comes downhill in desperate situations, Musashi is willing to put his life on the line to protect his friends and their future.

While Musashi is not as intelligent as Ryoma or Hayato, he is very physically powerful and is highly skilled in Judo, creating his own variation of the hammer throw called Daisetsuzan Oroshi. Musashi appears to know about vehicle mechanics as he was able to make repairs to a Getter machine. He is very physically durable, able to survive and remain conscious after a massive electric shock as well as being impaled through the abdomen. While his piloting skills are not up to par as Ryoma or Hayato, Musashi is capable to flying the Getter Machines and the Getter Robo to their limit to the point of controlling all three Getter Machine and the Getter Robo at once. Musashi's most powerful asset however is his indomitable will, refusing to back down from a situation even if his life is put in danger.

Encounter with Getter and Dinosaurs[]

Musashi was training in the mountains when he encountered strange apemen. He showed himself as their superior through his fighting skills and his higher intelligence (relatively speaking). He encountered the crashed Ryoma and helped against the Reptiloids as well as help repair and pilot the Eagle Getter unit. Seeing the Getter Robo in action, Musashi decides to join them in battle.

While Musashi attempted to apply to be a Getter pilot, he lacked the minimum intelligence and reflexes. Adamant though he strived to join even locking Dr. Saotome in a supply closest and took his pilot suit to pilot the Getter as a Mechasaurus attacked. While Musashi mostly took a backseat when he revealed himself, when Ryoma and Hayato passed out from the massive shockwave caused by the Mechasaurus' destruction Musashi stayed conscious and managed to defeat some attacking Mechasaurus. Seeing Musashi's performance, he was accepted into the Getter Team.

Battles against the Empires[]

Musashi remained a staple part of the Getter Team, helping fight against the Chiryu Clan even after he was badly wounded whether to defend the Saotome family or fight against a Mechasaurus. He stayed loyal and always fought with his teammates and mourned the supposed death of Ryoma until going out to look for him in Y City. At Y City, they encounter a new enemy in the form of the Hyakki Empire and later the Dinosaur Empire launches an assault against the Saotome Institute. With Ryoma and Hayato occupied, Musashi comes up with a plan to stop the attack and complete a new Getter Robo in time.

Musashi controls all of the Getter Machines to battle the Mechasaurus armies. While badly outnumbered and later overwhelmed, Musashi makes a last ditch effort to use the Getter's Getter Core to cause a Getter Ray meltdown that wipes out the armies but at the cost of his life. Ryoma who had lost his memories regains them after Musashi's sacrifice as a mental image of Musashi appears in his mind as a reflection on Musashi's fallen breast plate, glad that Ryoma regained them.

Return through the Getter[]

While Musashi's death left a legacy for his teammates to fight on, he was at times seen within the Getter Rays. Many years in the future, clones of Musashi serve as leaders of a human army fighting against the Andromeda Country in the future. He encounters the current Getter Team consisting of Ryoma's son Takuma Nagare, Baku Yamagishi, and Kamui Sho along with the crew of the Gettersaurus in the fight against the Andromeda army. He explains to the Getter Team what has transpired and how humanity has progressed because of the Getter. Later after the battle with Andromeda, Musashi sends them back to their time. 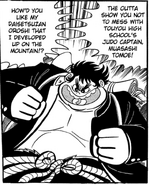 Musashi at the beginning of the saga 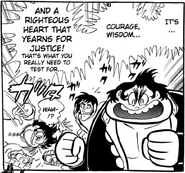 Musashi states what he believes a Getter pilot should have 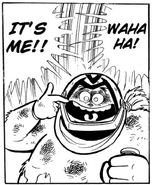 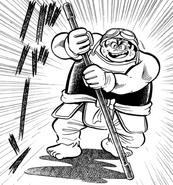 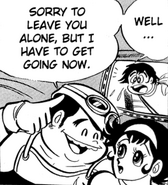 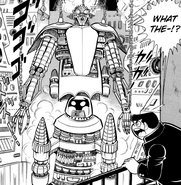 Musashi goes into his final fight

Is this the last time we'll ever see of Musashi?!?!

Musashi in Go for it, Musashi!
Community content is available under CC-BY-SA unless otherwise noted.
Advertisement