Mecha Nihonki was a Hyakki Beast piloted by an Oni of the same name.

Mecha Nihonki was a humanoid Hyakki Beast, it had long whip like arms, a shelled body, large curved bull horns and a face with a grill plate, not to far reminiscent of Mazinger Z.

The Mech was capable of flight and extending its tentacle arms for use of combat. 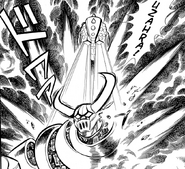