Mecha Ipponki was a Hyakki Beast piloted by an Oni of the same name. It was sent out shortly after the awakening of Uzahra.

Mecha Ipponki was a large humanoid Hyakki Beast with a large bladed head. Its face was covered over allowing only for its eyes to peek out. There was a row of spikes around its spiked belt.

Mecha Ipponki was able to fly and use the various blades located on its belt as offensive weapons, either in melee format or as missiles. 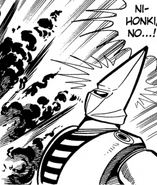