Mecha Gohonki was a Hyakki Beast piloted by an Oni of the same name. It was sent out shortly after the awakening of Uzahra.

Like its pilot Mecha Gohonki was short and squat with a large hunched back, making it slightly resemble a turtle. It had long talon like fingers and misshapen eyes. The right side of its face had five horns that get smaller going down.

Mecha Gohonki was capable of flight and could fire missiles from its stomach. It had long talon-like fingers and a large retractable buzz-saw coming out from its back. 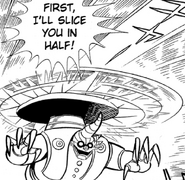