Maoki was a gargantuan Hyakki Beast compiled up out of the bodies of Hayato Jin's old gang members.

Maoki was a gigantic robot with a humanoid shape and a large muscled body. There were large horn on its sholders and another pair on his head. The horn on top of its head had the face of Ryuji who serves as the main unit.

Maoki possessed great and powerful amounts of strength. The hundreds of units composing its body could separate and fly at while allowing high agility. It's main weakness is the Ryuji unit that controls the whole unit, which when destroyed causes Maoki to lose control of its body. Ryuji's control can also be overridden by a remote control from the Hyakki Empire.

Ryuji had lead the gang under him to become cyborgs that could potentially overpower the Getter Robo itself. Eventually the gang members that remained combined to become Maoki fighting against the Getter Robo G piloted by Ryoma and Benkei. Maoki was ready to finish the Getter off until Hayato challenged Ryuji to a full fight with him as the third pilot. Reluctantly, Ryuji agreed until Maoki was taken control of by Dr. Gura. Faced with no alternative, Hayato boarded Getter Liger to weaken Maoki with the Getter Dragon finishing the Hyakki Beast off.

Ryuji combines to make the head of Maoki 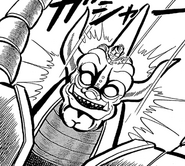 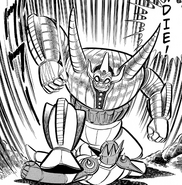 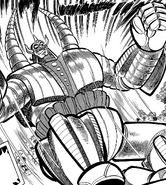 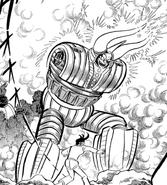