Kyoraiki was a kamikaze Hyakki Beast sent to go and destroy both the Saotome Institute and the Getter Robo.

Kyoraiki had a humanoid upper body with a grill plate mouth piece, small eyes, a thin horn on his head, and a large crescent moon shaped crest on extending from the top of his head. His lower half however is a gigantic missile.

Kyoraiki could fly at mach 5 speed and was packed with thousands of explosives. He also carried a lance like weapon for combat but it is never used in the time it was available. 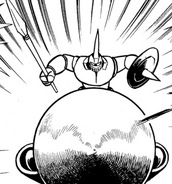