Jyuboki was one of the strongest of the Hyakki Empire's commanders. He planned to wipe out the Getter Team by murdering them in a booby-trapped building, with the Hyakki Beast Kyojyuki as his trump card.

Jyuboki was short and well built. He had a massive cluster of horns on his head and a long spiked monobrow with black markings around his eyes. Like all high ranking Hyakki Empire members, he work a military styled uniform with the coat held up buttoned.

Jyoboki had great psychic powers allowing him to fly, levitate in midair, and manipulate objects around him.

Jyoboki had a seemingly calm personality who took his role very seriously. However after his plan failed he showed signs of anger which later caused his death.

Jyuboki met with Emperor Burai to take out the Getter Team by drawing in their attention through a building that Burai would control from a great distance. Jyuboki oversaw the process happening as the plan seemed to perfectly. Unfortunately, the Getter G managed to free the survivors including Hayato who was held in the building. Enraged, Jyuboki tried to kill Ryoma in the Getter's cockpit. But Ryoma had the Getter Tomahawk get in the way of the charge, killing Jyuboki. 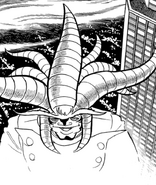 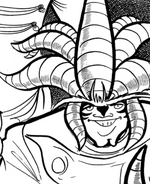 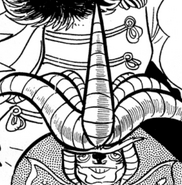 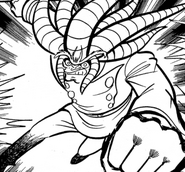