Jin is a member of the Getter Team selected by Saotome to pilot the Dino Getter Robo. He is a childhood friend of Tomoe and helped found their guerrilla forces. He was held captive by the Dinosaur Empire but was given solace by princess Naga until her death by Drago.

Jin resembles his original counterpart as a lean yet fit young man with shoulder length dark hair and piercing eyes. He is usually dressed in black clothes that feature some highlights while also wearing armor.

Jin for the most part is calm and cool, but unlike his other counterparts he is far from cold and even offered himself to the Dinosaur Empire princess Naga out of chivalry for her kindness. He is also loyal, refusing to give away anything about the other guerrillas when tortured.

However, it is those same loyalties that can push Jin to breaking points as when Naga was savagely killed by her brother Drago, Hayato wanted nothing more than revenge and acted sadistically very similar to his original manga counterpart from before the Getter Team. Still, when he does have something worth fighting for, Jin would fight until his last breath, especially if it was against the empire.

Jin is very tactical, being the leader in sabotage operations, taking out special resources for the empire. Spending time with Naga allowed him to be able to read and write, something that humanity had lost after the empire's takeover. As a pilot with the bionics equipped, Jin becomes a great pilot for the Dino Getter Robo able to fully utilize his formation of the Getter to great effects with speed and maneuverability.

Jin helped his friend Tomoe found the anti-imperialist guerrilla factions of humans. When on a mission however, Jin and his platoon are ambushed and all but Jin are killed. When tortured by the masses, Jin was given solace by the princess, Naga. Naga taught him how to read and write as well as give him comfort during his times of distress for three years. By modern times however, Naga's vicious brother Drago appears knowing what his sister did behind everyone's backs. Drago kicks Jin to the ground and attacks Naga when she defends Jin. Drago has his men bind him to a rock where Jin would he would have been killed by newts and a pterodactyl. Naga tries to free Jin but Drago ambushes her and bites Naga's neck off, killing her. Jin cries out unafraid of what Drago will do to him now.

Nagare saves him in the nick of time while Tomoe breaks Jin's chains. As Drago readies his Mechasaurus Pikanodon, Jin witnesses the Dino Getter and asks for its power and through the Getter Rays, is given the equipment to pilot the Getter-2 formation. Fighting against Pikanodon in an illusionary copy of the Dino Getter's Getter 1 formation, Jin manages to damage the face but is knocked back and only gets back up when Tomoe takes the controls from Saotome. Getting back on his feet, Jin with the rest of the Getter Team use the Getter 2's alternate form to finish off Drago.

With Drago dealt with, the Getter Team takes the fight to his and Naga's father, the lord Ghoul. While learning of Saotome's role in the evolution that created the Dinosaur Empire in the first place while fighting Ghoul's monster form, the Getter Team put all they have into a final attack destroying Ghoul. 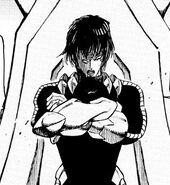 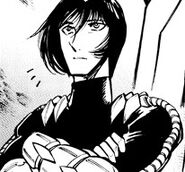