Jack King is an American pilot controlling the main body of the Texas Mack. He is also the older brother of Mary King.

Jack is dressed like a stereotypical cowboy including a tan ten gallon hat, white gloves, and a brown gun holster. He has brown hair with bushy eyebrows, brown eyes, a cleft chin, and a distinctly shaped nose. He wears a light brown shirt with a poncho like pad on top and a yellow scarf. Jack is a cocky young man confident in the Texas Mack, bragging the small victories he can achieve despite how it happens. However, after a close encounter with a Mechasaurus, Jack grew to respect the Getter Team and the Getter Robo.

Jack is a decent pilot able to control the Texas Mack and overpower two of the three forms of the Getter Robo. 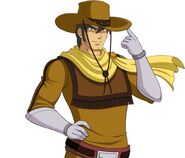