Invincible Battleship Dai is the ultimate weapon of Yura the Great. It is a large mobile fortress moved by a pair of Mechasaurus in battle against the Getter Robo.

The main piece of Dai resembles a large aircraft carrier with a robotic command center near the back featuring a head with red lense eyes, antenna sticking out of its head, and padded chest area. Below this command center are a series of cannons. The sauropod Mechasaurus that pull the main body are much larger than the regular kind, resembling gigantic toothed apatosaurs with red eyes and collars. The combined length of the entire Dai structure is 400 meters.

Dai is equipped with a barrier for defense and specializes in close combat with its anti-aircraft weaponry. Dai holds storage for two hundred aircrafts including bombers and jets and are released from the mounts' mouths. However it has a crucial weakness inf the form of a blind spot for the anti-aircraft weaponry allowing strategically placed weapons to decimate Dai. 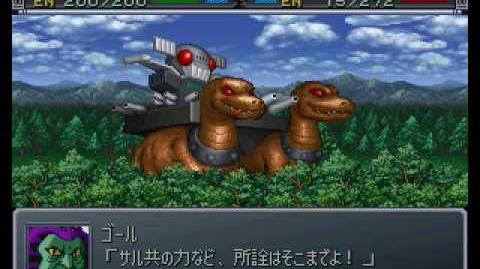