Invaders are parasitic entities born of over-exposure to Getter Rays. They serve as the main antagonistic force of the OVA Getter Robo Armageddon.

They typically resemble black reptilian-esque creatures with metallic teeth and claws on Earth and its moon, and resemble insectoid creatures as well as annelid-like creatures in the outer Solar System; but are capable of potentially morphing into any possible form. They infect both organic lifeforms and machinery and subvert them to their own twisted ideal of evolution. While humans become Invaders, mechs become known as Metal Beasts (a name borrowed from Getter Robo Go).

Invaders are capable of surviving in almost any environment, and possess the ability to immediately adapt to any environmental shift with the exception of environments bathed in intense Getter Radiation, like any area directly hit with a Getter Beam. This extreme adaptability comes with an instinct to consume everything that could hold a shred of use. Some Invaders, Cohen and Stinger especially, show an ability to adapt and thrive in environments which would normally either send an Invader into dormancy or kill it outright. Infected humans not only show maniacal obsessions with misconceived ideas of Darwinian evolution, but also display physical features associated with Invaders in either the area of infection or the first post-infection open wound. Infected machines typically display Invaders squirming out of open joints, with one notable exception.

Although individuals like Michiru Saotome and Dr. Saotome can apparently display some resistance to the infection process, the only way to deal with an infection is either stressing the new Invader with weaponry like a Getter Robo's physical weaponry or overloading the victim with concentrated Getter Rays to the point where they start to burst. Temporary means of dispatching Invaders include a presumably electric barrier that is installed in the Tower and freezing them with liquid nitrogen, although the former method lasts as long as power can be supplied to whatever generates this 'force field' and the latter requires handling a liquid that can be potentially as lethal as an Invader due to its extremely low temperature (the maximum temperature being 77K, -196° C, or -321° F); and the coating will eventually melt, as Benkei points out to Kei. Notably, the modified human known simply as Go can repel Invaders; although this is only shown in the third episode (likely due to a directorial shift between the first three episodes and the subsequent episodes).

The size of Invaders can vary between nanoscopic and that of an average gas giant of the outer solar system as displayed in both the various Invaders that melded with Getter Robo G to form Metal Beast Dragon and the massive beast seen at the end of the series that house the consciousnesses of Cowen and Stinger. Aside from twisted morals, the memories and personalities of any infected are preserved, as shown by Dr. Saotome, and his former coworkers who were dispatched 13 years prior by Cohen and Stinger. 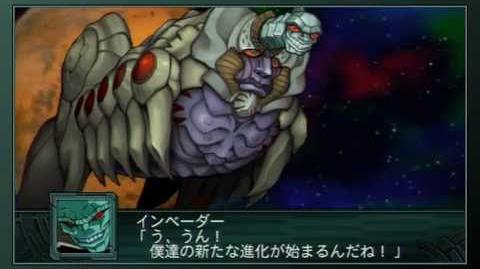