Hayato Jin is a former young revolutionist who was recruited by Dr. Saotome to pilot the Getter Robo.

Hayato has black shoulder length hair that usually hangs forward and piercing eyes with a rather elongated face. He stands at average length with an athletic build. His pilot suit consists of a dark blue jump suit with a white helmet featuring red decorations, a white jaw piece, and a clear visor. He also wears a red scarf when in suit.

Hayato was originally a troublemaker who disliked authority of all kinds. However, seeing the threats that the Saotome faced changed his outlook. Compared to the hard-core but compassionate Ryoma, Hayato is more of a cynical realist willing to make sacrifices of victims too far gone and tries not to worry about outcomes too much, but refuses to throw away the lives of comrades. However if they do plan on sacrificing themselves, Hayato is willing to put his life on the line with them.

Hayato possessed great gymnastic skills that allowed great flexibility and agility. These skills and great physical strength gives him combat prowess similar to Ryoma. He is the most intelligent member of the Getter Team. His body's condition is ideal for piloting the Getter Machines, with Hayato always piloting the ground based Getter formations. 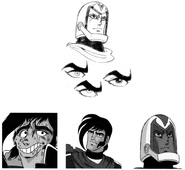