Gustaf H-24 is a German mecha piloted by Heim Shatner and was a part of the Allied Robot Corps during the battle against Vega Zone.

Gustaf is a humanoid robot possessing a bulky appearance particularly on the shoulder areas as well as the forearms. Its hands feature large fingers composed of three digits. The head of the mecha is cylindrical with eyes peering through the front. Its upper legs and abdomen also feature tank tread-like padding while the lower legs are covered in heavy armor.

Gustaf H-24 has an ability to split itself diagonally into two modules. The upper module being able to transform into a Helicopter, while the lower module transforms into a Tank. The Gustaf in it's combined form can attack it's opponents with it's arms as well as the cannon on its back. When split into two distinct modules, the Helicopter can shoot enemies with it's Vulcan gun and can also drop bombs while the Tank module can fire it's cannon. 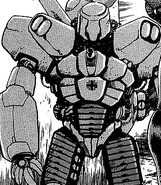 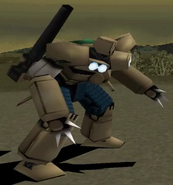 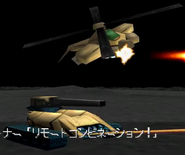 Gustaf H-24 in it's Helicopter and Tank modules