Gigi was a Mechasaurus sent to try and kill Ryoma Nagare and Hayato Jin. It was the first Mechasaur encountered and destroyed in the manga.

Gigi was a gigantic Mechasaurus slightly resembling a plane. It had a pair of giant long necked dinosaur heads on its wings. Its body was thin resembling a torpedo. Its head had a sharp point at the top with antenna sticking from the side of its head. It had a menacing face in the centre.

Gigi was able to fly and fire missiles from various places on its body. it could use the dinosaur heads like arms and could eject its centre head when damage became too great to its body. 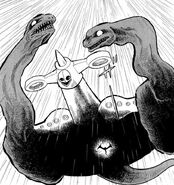 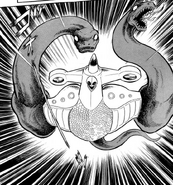 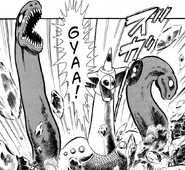 Gigi is defeated
Community content is available under CC-BY-SA unless otherwise noted.
Advertisement