Giga was a gigantic Mechasaurus designed to battle the Getter after copying the statisics of its previous battles.

Giga was enormous in size, he had a long arched head with spikes along it and large circular eyes. The reptilian parts of his body poke through at various parts. He had large circular sholders with spikes in the centre. Cybernetic claws and a long tail with a dinosaurs head on the end. There was a set of three missiles along its back.

Giga was full with information of past battles with the Getter Robo and had great amounts of strength. Its presumed the missiles on his back either allowed for flight or attack. 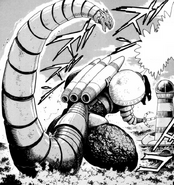 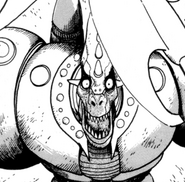 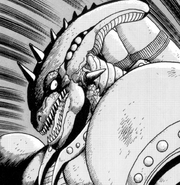 Giga loses it
Community content is available under CC-BY-SA unless otherwise noted.
Advertisement