Getter Robo Zan (ゲッターロボ斬) is a Getter robot exclusively found in Getter Robo Daikessen !. Unlike other robots in the game, it can only be piloted by women including its main pilots Akane Mizuki, Tsubaki Akiyama and Kaede Shibasaki. However any other female pilot can control it as well.

Getter Robo Zan resembles a female version of the Getter Robo with a more traditional Japanese style. The primary Getter Machine however is colored pink instead of red.

Speedy ground form of the Getter Zan featuring a white paint job. Armed with a drill on its right hand, it is capable of moving at speeds high enough to produce shadow clones.

Sea and heavy form of the Getter Zan with a yellow lead color. 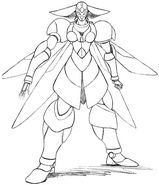 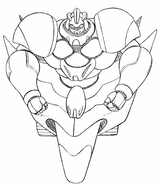 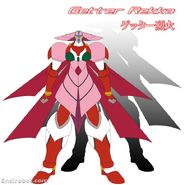 Getter Rekka with it's Katana