Getter Robo Hien ~The Earth Suicide~ (ゲッターロボ飛焔 ～The Earth Suicide～) is a web manga series created by Naoto Tsushima in September 2007. The manga went on hiatus until the third volume was released in print.

Taking place some time after Getter Robo Go, a mad scientist named Professor Jacov had become fused with highly evolved plants called Plant Beasts and had begun spreading them over the world. To combat them, the new director of the Saotome Institute, Hayato Jin, readies a prototype Getter Robo to fight them off and recruits three pilots. Two of the pilots Dan Amakusa (whose parents used to work for Jacov and were killed right in front of him) and Goki Hagane (who lost his friends and teacher to the Plant Beasts) encounter a young man named Tsurugi Ryuki a gifted fighter who lost his father and friends to the Plant Beasts and provides information on how to defeat them. With some convincing, Hayato allows Tsurugi to join their ranks in the battle against the Plant Beasts.

Later it is revealed that Professor Jacov is merely acting on the will of the Plant Beasts that have evolved due to Getter Rays. He is then betrayed by his son Manius Jacov who then awakens the ultimate Plant Beast, Getter Gaia. The battle with the Gaia is long and difficult with the Getter at a big disadvantage. But with the Getter Energy flowing in the prototype Getter evolved into a stronger form, Getter Robo Hien and manages to make a comeback. But the Getter Gaia was destroyed a machine with open hostility to the Getter Rays, Bug. Before Bug could damage the Getter, the Getter Emperor appeared. Tsurugi, understanding what was happening took the Hien into battle alone to fight off the other Getter Machines in this alternate reality. 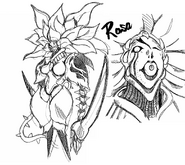