Originally built for space travel, the prototype Getter Robo Go was a project headed by Dr. Tachibana. With the threat of Prof. Lando arising, the Getter prototype was used to battle the Metal Beasts. With further battles, the completed model was ready and the battle with Lando's army would rage on.

Getter Robo Go is the super robot representing Japan in the war against Professor Lando. Based on a prototype created by Hayato Jin (seen in the later chapters of Shin Getter Robo), it is powered by Plasma Energy after Getter Rays were seen as too dangerous after an incident with Shin Getter Robo. Due to this, it is considered to be the most realistic (relatively speaking) of the super robots to be given the name Getter.

The Getter Robo's design was built on different origins depending on the media. In the anime Dr. Tachibana outfitted the Getter with the G Ore found in the Arctic making it the only weapon capable of fighting the Metal Beasts. The magnetic properties of the G Ore is what allows the Getter to link up.

The manga had the design come from Hayato Jin building the Getter on his years of experience with the earlier Getter Robo robots while using a plasma energy source instead of Getter Rays in order to give pilots a better chance of survival.

In the prototype stage, the Getter was restricted to a single form that had no special features. In the anime as it was built for space travel it had no weapons with the exception of its burner. It was later outfitted with different weapons including a "Handy Missile Cannon" and an accidental use of the Knuckle Bomber from a malfunction with the hydraulics system. The manga version seen in Shin Getter Robo also had no weapons and could only rely on close combat to fight enemies.

Getter Go is the main mode of Getter Robo Go, its main pilot is Gō Ichimonji. In the anime, it was a ground combat model while the manga version portrayed it as a sky based mode including the ability to fly for a nearly unlimited amount of time whereas the anime version can only fly by igniting the three engines of its components to fly a short distance. Its appearance takes after the prototype model complete with the blue paint job. While it is built for combat on the ground it is capable of combining and having limited use underwater.

An anime-exclusive form that uses the G-Arm Riser to become armor for the Getter Go formation. It is armed with the Jikoken Sword Tomahawk that is powered by the energy reactor from the Arm Riser. The armor also act as amplifying devices to properly use the weapon. Due to the state of the Sword Tomahawk, it can only be used by the Getter Go formation. The armor's materials are built around the same manufacturing techniques used for G Ore. The Sword Tomahawk when low on energy could be used like an axe and even be thrown like a boomerang.

Getter Sho is a feminine formation armed with drills piloted by Shō Tachibana. While both versions are built for high speed the anime version is built for flight and dogfights while the manga version is designed for ground combat but is capable of faster (yet inefficient) flight than Getter Go. The anime version keeps to its intention for space travel equipping the Getter with materials that can move through the atmosphere including a booster that can even have the Getter go into space. The manga version is often used as a scout.

Getter Gai is piloted by Gai Daidō that is built for bombardment on land and submersible combat. Among the three states, it has the least amount of screen time; the manga version only appeared once. 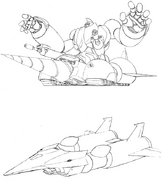 Getter Go as it appears in Getter Robo Go Anime. 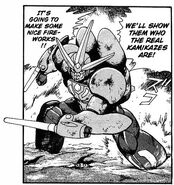 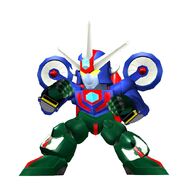 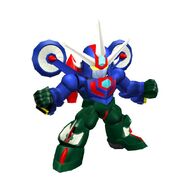 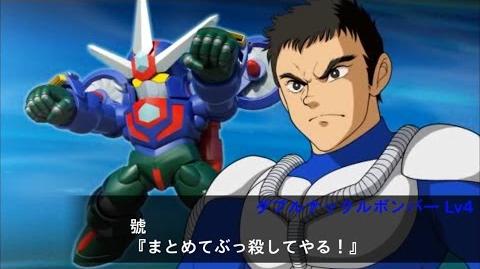