Getter Robo Arc (also written as Getter Robo āḥ) is the eponymous Super Robot of the manga of the same. It is described by its creator, Hayato Jin, as the final legacy of Dr. Saotome, but whether this means it was built using Saotome's blueprints or just in honor of him is unknown. It is piloted by Takuma Nagare, Kamui Sho, and Baku Yamagishi.

Getter Robo Arc has a noticeably more menacing appearance compared to earlier models. Its naming and design are meant to invoke a Buddhist deity with each forms name containing a Sanskrit character that is the seed syllable of the deity they represent. Arc (āḥ) comes from Vairocana, Kirik (hrīḥ) comes from Amitābhaḥ, and Khan (hāṃ) comes from Acala. All forms are capable of flight in one form or another. Its combat prowess can be roughly compared to Shin Getter Robo (before it was infused with Getter energy from Shin Getter Robo G), and its energy output is much more stable. That being said, there are still limits to Arc's abilities, as it was losing to Bug and (only in the anime) almost lost to Uzahra.

Although, as per usual, three pilots are needed to fully unfold its combat potential, Getter Arc is shown to be piloted by Kamui alone, and, later, only by Takuma. In the anime, Takuma even freely alternates between Arc's three forms.

The primary form which corresponds the most to the old Getter Robo models. It has a ferocious fighting style, even more so than earlier Getter-1 models. It is capable of ultra high-speed flight in zigzaging, UFO-esque patterns, akin to Shin Getter.

The highly mobile land-based form using the right arm as a drill for combat and a free left arm. It is capable of traveling underground at a fast speed, flying and suspending itself in the air.

The heavy duty form with a barbed appearance. Its vast strength allows it to overpower enemies many times its size, and it has limited flight capabilities. While its predecessors were primary made for underwater combat, hāṃ had never been seen in submarine combat in manga (though anime fixed that). 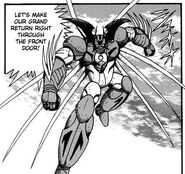 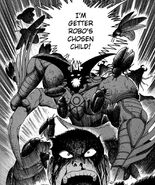