Chapter 1: "The Final Ten Seconds of Space" by Eiichi Shimizu and Tomohiro Shimoguchi[]

The chapter begins with the original Getter team in Getter Robo battling a new Mechasaurus that was able to best Getter-2 and Getter-3. When they switch to Getter-1 and use its Getter Beam the mech is destroyed, but with its destruction the Getter Rays that fueled the Getter became unstable. This instablility showed the Getter team a vision of the future. In this vision they saw future Getter Robos that were in an unknown region of space. Far ahead from the Getter was a silhouette of Getter Emperor. After the vision ended the team were confused on what just happened. Hayato remarked that what they saw wasn't their future, but Getter's future. The list of the Getters they saw were:

Chapter 3: "The Girl From the Dinosaur Empire" by Go Nagai and Dynamic Pro[]

Chapter 4: "Will of the Universe" by Masakazu Ooi[] 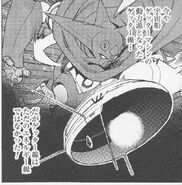 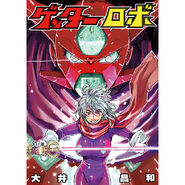