Getter Emperor (ゲッターエンペラー Gettā Enperā) is a gigantic being described as the final evolution of the Getter. Wielding godlike power, it continually absorbs matter on a universal scale. It is depicted as neither a malevolent or benevolent force, and is a major plot point throughout Shin Getter Robo and the entire Getter Robo universe.

Getter Emperor has currently only been seen in the form of 'Getter Emperor 1' which follows the traditional Getter 1 design, and expands upon it. Other forms are speculated to follow the same pattern as the Shin Getter Robo manga shows two other components.

Getter Emperor is an ever-expanding mech typically depicted at a galactic scale. Its components are composed of three large starships with the heads of the Getter 1-3 formations that are able to combine.

Each Getter Machine is armed with a Getter Beam capable of destroying an entire planet, with the complete machine's Getter Beam capable of traveling over 400 million light-years. This in turn helped jump start numerous evolutionary paths. It is also surrounded by a Getter Energy barrier that makes it impervious to all other weapons. The machine's own size likely gives it a powerful gravitational field and the corrosive nature of concentrated Getter Rays cause incompatible matter, energy, and space to be consumed. Its entire energy pool equates the output to the Big Bang and just its combination into Getter Emperor One caused galaxies to quake. The Getter can also manipulate space enough to destroy a subspace. Its ties to the Getter Rays gives it limited omniscience and allows it to stay steps ahead of an opponent. The more Emperor consumes the more powerful it becomes, with no limits to its evolution.

It is also supported by smaller Getter Machine star ships. Some of the ships are equipped with weapons not as powerful as Emperor and have equipment that contain data and memories of beings tied to the Getter Rays like Musashi Tomoe to create clones.

It is heavily implicated that Emperor is just a highly evolved form of the Getter Robo G, after it had been buried by Benkei and gone into a cocoon state for many years, although it can also be stated to be the final evolution of any Getter Robo. It could also have been the result of Shin Getter Robo absorbing the planet Mars after landing on it.

Getter Emperor is a massive, ever-expanding Getter robot existing in the far future. It signifies the unstoppable force of Getter Rays, and poses a threat to all life in the universe as a result of its sheer size and power. In all appearances of Shin Getter Robo, the Emperor has been alluded to; usually either the Emperor itself or the appearance of the Emperor's equivalent of the Eagle Machine.

Getter Emperor's first official appearance was in the manga Shin Getter Robo. Here, it is depicted in the distant future terrorizing an alien armada called the Andromeda Country. This prompts one of its smaller vessels to travel back to the era of the creation of the Emperor's possible larval form: Shin Getter Robo. After a grueling struggle, the enormous vessel is pulled - along with Ryoma Nagare and Hayato Jin in Shin Getter Robo - back to its native era where it is destroyed by Getter Emperor. After Ryoma and Hayato ponder the meaning of this enormous Getter, they are sent back to their own time.

Emperor appeared again somewhere in the future where a fleet of humans used it to fight against the Andromeda Country. Humanity had been fighting a long war with the Andromeda Country and was on the brink of losing until Emperor appeared from a forgotten solar system. With this new power, humanity spread across space and conquered countless worlds. The humans saw Getter as their salvation, enemies saw Emperor as an all-consuming force that needed to be prevented from coming into existence.

Getter Emperor in "The Final Ten Seconds of Space."

Getter Robo in "God and Dragon." 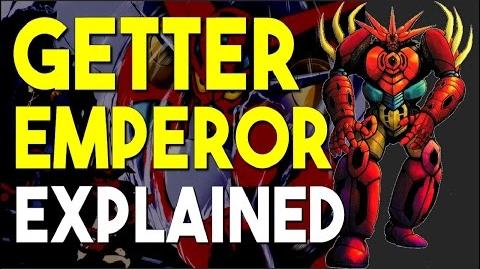 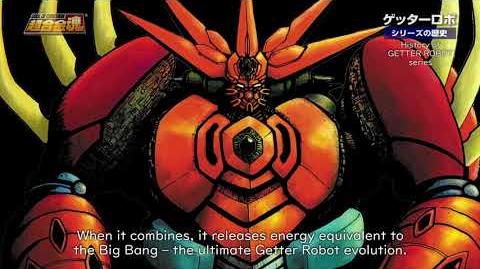