General Hidler was a high ranking officer in the Hyakki Empire. He commanded several Hyakki Beasts and proved to be a great threat against the Getter Team.

General Hidler was tall and well built, he had a gaunt face and a toothbrush mustache, a mullet like haircut and two large cow like horns on his head.

General Hidler was a proud and determined member of his Empire, and even in the face of death he was happy to mock his enemies.

Hidler was first seen as the Hyakki Empire made their move in Y City reporting the progress to Emperor Burai. For most of Getter Robo G, Hidler would oversee most of the operations of the empire, confident that his soldiers and plans would pull through. In an effort to gain the Andromeda virus, Hidler went with a crew in the Jeronigan to retrieve it from human government agents after a scout Hyakki Beast was destroyed by the Getter Dragon. As Hidler fought against the Getter, he mocked the Getter Team that the virus was made by humans as he and his crew were crushed inside the destroyed Jeronigan. 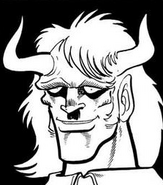 Hidler in the original Getter Robo 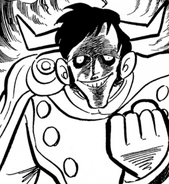 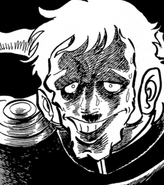 Hidler mocks the Getter team moments before they kill him
Community content is available under CC-BY-SA unless otherwise noted.
Advertisement