General Bat was Emperor Gore's second in command and a high ranking warrior within the Dinosaur Empire. He appears in both Getter Robo and Getter Robo āḥ.

General bat was a tall humanoid, he had a large pterodactyl like headdress with wings and a small head like crest in the center. He had a small mustache and wore a long black cape.

Bat was devoted to his Empire, as well as his master Gore, he was however far more cool headed than his Lord, and knew when he was defeated. Years later, an older and somewhat senile Bat looks back with fond memories of his battles with Ryoma Nagare and the Getter Crew, describing his old enemy with sincere respect.

General Bat was usually seen by Emperor Gore's side while informing him of events taking place and usually mobilized Mechasaurs into battle. Near the assault on the Saotome Institute, General Bat expressed concerns about attacking the Getter Robo head on with a fleet of incomplete Mechasaurs. After the fleet was wiped out by both the suicide bombing of the Getter Robo and the navy's destruction by a Hyakki Beast, the magma levels in the Earth were starting to falter forcing the empire commanded by General Bat regrettably had to abandon Emperor Gore as they could not reach him in time and their resources were too depleted to support him on the surface.

Years later, General Bat serves the current Emperor Gore III and enters an alliance with the Saotome Institute to deal with the Andromeda Country by sending his best pilots and the Getter Saurus to support the current Getter Team. Bat seemingly aged a lot in body and mind, being transported in a carriage chair and randomly telling stories from his past nobody asked for. In the anime, it's all but facade - old Bat turns out to be perfectly sane and healthy as he effortlessly overpowers much larger General Basilisk. It's hinted that Bat is a long-time supporter of Sho Kamui and one of central figures in his conspiracy. 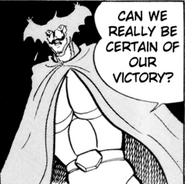 Bat expresses his concerns about the defeat of the Getter 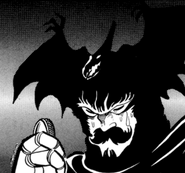