Gattan was a member of theChiryu Clan who like the others was a mutant, (although in his case he seemed more cybernetic than mutated). He assisted Neon in his attack on the Saotome Institute.

Gattan was a large muscular lizard, he stood on his hind legs and wore black spiked armour. He had a lengthy tail, claws and a snout.

Gattan had a massive machine gun implanted in his chest which could pop out at wish. He also had large claws and carried a sword for combat.

Basing on his brief appearance it is assumed that Gattan generally just enjoyed the killing of humans, and like the other members of the Chiryu Clan he had great respect for Neon. 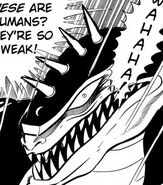 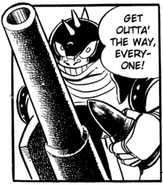 Gattan is killed
Community content is available under CC-BY-SA unless otherwise noted.
Advertisement