The Garon Z-54 is a two part machine with a humanoid body with spiky hair and Mongolian styled armor sitting on top of a demonic monster that has several horns extending out of its head and chin.

The Garon has a pair of swords to slice its enemies apart. The monster head can breathe out fire. The warrior also can shoot out beams from his eyes. Garon is able to move at a high speed, using appearing right behind an opponent to make a surprise attack.

Garon Z-54 was used by Shinichi when Professor Lando's forces, under the command of Count Rasetsu attacked the Allied Robot Corps' base. The robot's immense speed made it difficult for the Heroes to fight it. However Sho's psychic-like connection with her brother allowed the Getter Team to intercept and attack and land a killing blow against the Garon with they're Getter Robo Go. 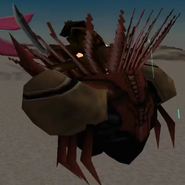