Garo is a member of the Chiryu Clan that attacked the Saotome Institute.

Garo is a large bodied humanoid with a pair of large horns on his head and a single horn extending from his forehead. Most of his body was covered by a long cloak while beneath this is metallic armor.

Garo is loyal to his clansmen, doing what he can to get his clan in good graces with the rest of the Dinosaur Empire. He does so while boasting his power to what he believes as a lower lifeform.

Garo possesses the unique ability to extend his horn to pierce through enemies. He also has four hearts and two brains that allow him to survive deadly blows and fake death.

Garo joined his squad to attack the institute. After infiltrating the lab with Dera and killing a few guards, he attacks a curious Musashi Tomoe. Musashi counters the attack with a death blow. He was later put under examination by the Saotome family while Musashi was recuperating. However when the lab was fully invaded by the Clan, Garo woke up thanks to his extra heart and revealed his true plans of killing the Professor. Musashi however, stopped him and held him off long enough for Hayato to sneak up from behind and blow his head off with a shotgun. 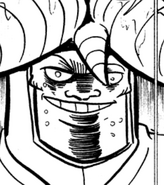 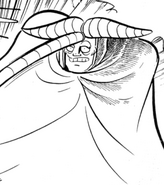