Gai Daido is the pilot of the water focused Getter formation of the Getter Robo Go. Originally introduced as a mechanic, he was later accepted as a pilot due to his understanding of machines.

Gai is a large bodied young man with some noticable muscles. He has short black hair in a crew cut fashion. Gai has a deep affection for the Getter Robo treating it with the utmost respect. Some of his colleagues call him a "Getter Lover" because of this. Gai however can be tough when he needs to be, fighting back against the racist American soldiers that attacked his scientist friends at the Alaska Base. After the launch of the Shin Getter Robo, Gai went insane from the enormous force of the Getter Rays and tried to destroy the Shin Getter. After he was absorbed into the mecha and seeing the visions of the Getter however, he gained a greater understanding of the mysterious force becoming a piece of the Getter as a result.

While Gai has not entered battle as much as his anime counterpart, he has a great understanding of the mechanics of the Getter Robo Go and other aircrafts able to judge its state from sound and the vibrations coming off the craft. This allowed him to pilot the Getter to its utmost potential even better than a retired air force pilot, as shown when he came up with a manuever to assume the Getter Gai formation in its damaged state.

Gai was first seen doing maintenance on the Getter after a test left it damaged. Gai met the pilots Go Ichimonji and Sho Tachibana during this showing his personality. When the pilot for the the third Getter Machine was unable to mobilize during a Metal Beast attack, Go and Sho had Gai take control despite Hayato's reluctance. While the Getter Machine was damaged, Gai came up with a manuever that allowed them to use the Getter Gai formation. Afterwards, Gai joined the Getter Team as the third pilot sticking around even as the Getter Team is forced to retreat to Alaska.

Gai remained behind in most of the battles repairing the Getter Robo while also having to deal with racist American soldiers lead by Schwartz Koff who were physically tormenting the scientists that came with the Getter Team. However, Gai managed to have a good relationship with the soldier Jim. By the time repairs were complete, Gai joined Go and Sho in battle against the Dragon Turtle and later fought against Shinichi Tachibana from within the mobile fortress managing to win in spite of a difficult fight. Gai then goes back to Japan with Go with the only surviving Getter Machine while Sho remains behind to fight the rest of the Metal Beast forces.

Gai upon coming back to Japan notices the bomb Metal Beasts and helps Go and Kei Minamikaze disable the bombs to prevent additional casualties. Upon stopping them, Gai along with the rest are shown inside the Saotome Institute containing the Shin Getter Robo. To get control of it, Gai goes to help find Hayato's old co-worker Ryoma Nagare especially with the rise of the Dinosaur Empire. However after finding Ryoma and encountering Messiah Tahir, they are attacked by Dinosaur Soldiers. Using the Shin Getter, the Getter team manages to blow away the army pursuing them. Gai however was overwhelmed by the immense power of the Getter Rays, losing his sanity. He tried to destroy the Getter but ended up becoming absorbed. As Go tried to help him, Gai told him not to worry as he saw visions in the Getter Rays as he fully assimilated into the Getter. 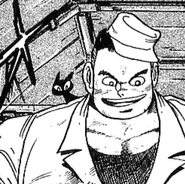 Gai and his pet cat at the start of Go 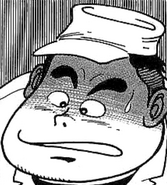 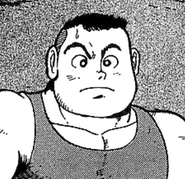 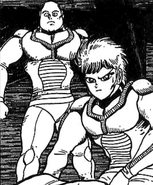 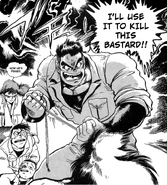 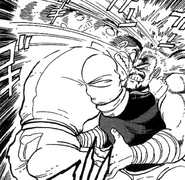 Gai beats down the Great Pygma
Community content is available under CC-BY-SA unless otherwise noted.
Advertisement